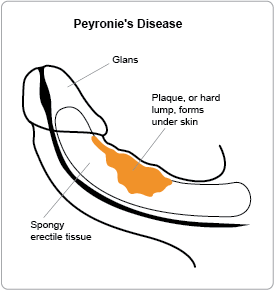 This disease involves the formation of fibrous plaques in one or both of the corpora cavernosa (erectile tissue) of the penis. This results in a curving, narrowing, and/or shortening of the penis. Occasionally it results in a penis with an “hourglass” shape. A man with Peyronie’s disease (PD) may initially complain to their doctor of painful erections, erectile dysfunction, or tangible areas of plaque formation that can be observed by a doctor. Over 3% of men have Peyronie’s disease, but the number may be much higher due to unreported cases. Many patients find the disease’s symptoms to be embarrassing, and are too uncomfortable to ask their doctor for help with their symptoms. Often patients assume that Peyronie’s disease is a normal consequence of aging, and fail to find out that it is treatable, and not to be simply passively endured.

The physiology of Peyronie’s disease varies greatly in terms of the number, size, and location of plaques. Additionally, the physical changes in penis length and curvature may range a great deal among patients affected by Peyronie’s disease. Physicians lack understanding of the causes of the disease, but some risk factors include diabetes, high blood pressure, and smoking. The disease may also be linked to autoimmune disease, chronic inflammation, certain inflammatory molecules (cytokines), excess fibrin and collagen (molecules that help form the matrix of skin and connective tissue). There are also a variety of genetic factors that include Dupuytren’s contractures and the cell marker human leukocyte antigen B27.

Once the doctor suspects Peyronie’s disease, a variety of tests may be performed, including penile measurements, ultrasound test, penile injection test and others. The doctor will record the length, girth, and degree of curvature of the penis, as well as alterations and symptoms during erections.