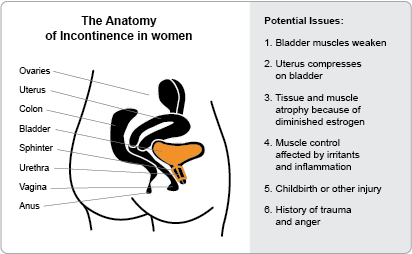 Millions of women around the world suffer from this symptom, and the severity varies greatly from woman to woman. In some cases, they may only feel the release of a small amount of urine during a run or after coughing, whereas in other cases, more seriously affected individuals may feel the need to urinate immediately, only to realize that urine has already been released.


Causes of Incontinence in Women

Urinary incontinence (UI) can be classified into four different types, based on symptoms. These include:

Diagnosis of Incontinence in Women

The doctor will perform a number of tests to determine the underlying cause of urinary incontinence. Once the root of the urinary incontinence is discovered, an appropriate treatment plan can be discussed to best manage symptoms and treat the underlying cause. Many women may feel embarrassed about their symptoms or feel that they cannot engage in normal activities, but a wide variety of treatments are available. The doctor may suggest a journal record of urination amount and frequency and leakage incidents. The doctor may perform a urine lab analysis or a bladder stress test (in which the patient is asked to duplicate “physically stressful” conditions where urine may be unwillingly released). The doctor may also test the urinary tract with an ultrasound or a small camera test known as a cystoscopy.